As the new Campus Life Center (CLC) rises to its full height and fills out the space formerly occupied by the Dobbs University Center (DUC), it’s good to recall what used to occupy that site.

The wonderful aerial photo below shows progress on the CLC as of two weeks ago. The Emory campus of 2018 is packed. Amazingly, the scene includes the Woodruff Library (upper-right corner), the Goizueta Business School (top), most of Emory Hospital and the Emory Clinic, some medical research facilities, the School of Medicine, some Campus Life facilities, and the newer freshman residence halls to the lower left. It’s either a beehive or an anthill. 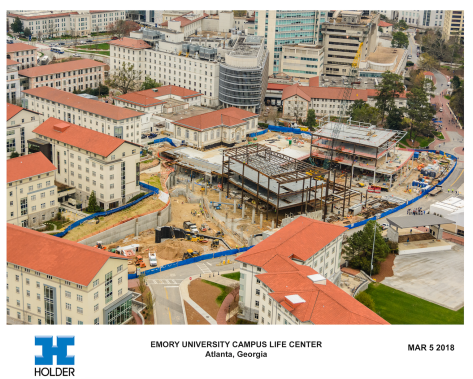 In contrast, the aerial below, from the 1930s, shows a similar perspective but a less built-up campus. The spot now occupied by concrete pillars and steel beams was, back then, the location of one of the first two dormitories on the Druid Hills campus, Winship Hall. That building bore the name of the trustee who paid for it, George Winship, who had had an extraordinarily successful career in manufacturing and cotton. He died at the age of eighty-one in April 1916, just months before the opening of the dormitory that would bear his name.

In the photo, Winship Hall  stands between the oval athletic field and the 1927 dining hall/auditorium, which was expanded to become the Alumni Memorial University Center in 1950.

Below is a close-up of Winship from the 1920s. Note the lovey autos! The basement of this building provided space for the first gymnasium on the Druid Hills campus, but it wasn’t much of a gym by our standards. According to Clyde Partin Sr., in Athletics for All (Bookhouse, 2006), the gym contained “parallel bars and other equipment–poles, weights, Indian clubs, punching  bags, and mats, . . . along with room for wrestling and boxing.”

When the University needed to expand the 1950s-era AMUC in the 1980s to accommodate a larger student body and more student organizations, Winship Hall came down, and in its place rose the west wing of the DUC. The legacy of Winship remained in the name of the Winship Ballroom, on the second floor of the DUC.

R. Howard Dobbs, who made the lead gift to help build the DUC, also served as an Emory trustee following an eminently successful career with the Life Insurance Company of Georgia.

By coincidence, the other of the first two dormitories in Druid Hills–across the street from Winship and, later, the DUC–also bore the name of Dobbs. This was  Samuel Candler Dobbs Hall, named for a nephew of Coca-Cola Founder Asa Candler. Samuel was no relation to Howard.

Samuel Dobbs worked for uncle Asa at the Coca-Cola Company and eventually rose to become president of the company from 1919 until 1920. In that capacity, he hosted the annual Coca-Cola Convention for a photo op in front of “his” dormitory in January 1920.

In the photo below, Dobbs is the man with the handsome head of curly white hair seated between two women. The woman to his right is most likely Lettie Pate Whitehead Evans, the first woman to serve on the Coca-Cola and Emory boards. (A residence hall at Emory bears her name.) The man to Dobbs’s left is bishop and University chancellor Warren Candler, and to Warren’s left sits his brother Asa Griggs Candler Sr.

As they look toward the then-empty space that would be filled by the Campus Life Center a century later, it would be interesting to hear their thoughts about the way the place has changed.