Note: This post has been updated. The original post indicated that planning for the current roundabout in Emory Village began just a few years before the roundabout was completed in 2011. An earlier plan, however, had been proposed by the Chace administration as part of the university’s comprehensive campus planning of the late 1990s.

Two decades ago, during the administration of Emory president Bill Chace, the university worked with campus planners and traffic consultants to design a new intersection at the front gate of the university. A recommendation went forward to DeKalb County to replace the traffic light at the five-point intersection with a roundabout. More than a decade passed before the county and businesses in Emory Village saw the wisdom of the recommendation. In 2011, the county completed the current roundabout, and along the way Emory enhanced the Haygood-Hopkins Gate with a sweeping pair of marble walls to create a grand entrance to the campus.

It turns out, oddly enough, that this concept was already half a century old when the roundabout opened, although no one may have known it at the time.

Recently, as I looked through materials in the Campus Buildings and Landmarks Collection in the university archives, I came across three drawings created in 1960. No documents or explanation accompanied the drawings, so I can’t say what the intention was behind them. Did the administration seriously contemplate an imposing new front door to the campus? Was this design merely a suggestion from an interested landscape architect? Did other plans take precedence, leaving these renderings to be forgotten?

What strikes me about the first drawing, below, is the plan for a building where the Boisfeuillet Jones Center would be constructed a quarter-century later. To the west of that “future building,” the architect suggested a memorial terrace in the space now occupied by the Oxford Road Building and its parking deck.

Here’s a close-up the west elevation of the memorial terrace, as if from Oxford Road:

More striking is the proposal for a traffic circle and a monumental “auto entrance” to the campus, shown below. The siting of the roundabout almost exactly matches the contours of the 2011 roundabout. It’s unclear from the sketch in the upper-left corner whether the Haygood-Hopkins Gate would have been retained as the central pillars of the two-way auto entrance, but the 2011 solution–which made the entrance one-way through the Haygood-Hopkins arch–works fine.

The third rendering, below, shows a similar but somewhat less grand entrance to the campus off Oxford Road, near the old Gilbert Hall. The university razed Gilbert (and its neighbor, Thomson Hall) in 2007 to realign the streets at that entrance and make room for the Psychology and Interdisciplinary Sciences Building. 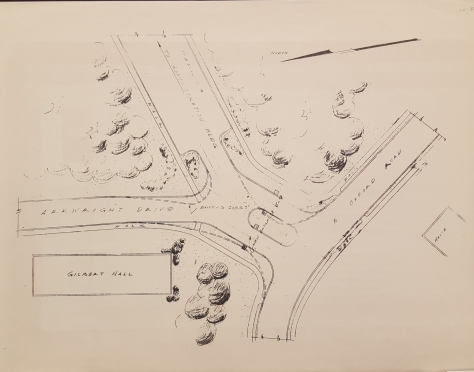 Someone in 1960 was thinking about making the campus more elegant. Unfortunately, succeeding decades would take the campus in a different direction, adding Brutalist-style architecture and impeded traffic patterns around the campus. It would take until the Chace administration — nearly four decades after these drawings were completed — before the university would begin attending to its built-up space with a similar concern for the stylish look and graceful flow of open spaces.