As a nine-story tower rises across Clifton Road from Harris Hall, I’m reminded of the Calico House.

The J Wing, as this new tower is called, is the latest addition to Emory University Hospital and will house 210 beds, new operating rooms, new ICUs, and a larger emergency department.

The J designation means it follows wings A through H, all of which which were constructed during seven decades across the street and up the block from the new tower. (The letter I was skipped.)

The first of those earlier wings—A and B—were built in 1922 and at that time were named Wesley Memorial Hospital. You can see the façade of the A wing here: 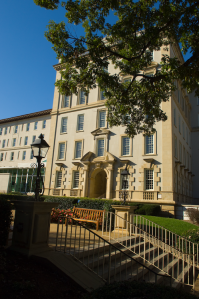 Here’s another look, circa 1922. The A and B wings, clad by construction scaffolding, appear in the upper-right corner against the edge of the photo.

The vast complex that now constitutes Emory University Hospital had its beginning in an antebellum house on the southeast corner of Auburn Avenue and Courtland Street, where the Auburn Avenue Research Library now stands. Called the Calico House, because of the fashionable patterns on its interior walls, it served as the headquarters for General Sherman after the Battle of Atlanta and before the Union army decamped for the coast. Here is an early-20th-century photo of the Calico House:

When the Methodists of north Georgia resolved, in 1903, to build a new hospital, they decided to locate it in Atlanta but soon ran into fund-raising difficulties. Coca-Cola’s Asa Candler, a devout Methodist, came to the rescue and bought the Calico House for use as that hospital, which the Methodists called Wesley Memorial Hospital. It housed fifty beds, had a medical staff of thirty-four doctors, and offered a training program for nurses (the forerunner of Emory’s Nell Hodgson Woodruff School of Nursing).

With the Emory School of Medicine functioning in Druid Hills after 1917, the hospital was moved to the A and B wings in December 1922. Twenty-five patients in the former Calico House were driven to the new hospital in ambulances provided by Atlanta’s funeral homes. The hospital was renamed Emory University Hospital in 1932 and has grown with the university.