I first posted this two years ago but always like revisiting the story of the first woman to enroll officially at Emory.

As the Emory Law School prepared to celebrate its centennial in 2016-17, a critical question came in from the publisher of the school’s celebratory book—accent or no accent?

The accent in question has inconsistently hovered over the second e in the name of Emory Law’s first female graduate: Eléonore Raoul.

Raoul was also the first woman to be formally enrolled in Emory. Legend has it that Chancellor Warren Candler was away from the campus that day in 1917, when Miss Raoul walked from her mother’s home at 870 Lullwater Road to have a chat with the dean of the new law school in Druid Hills. The chancellor  opposed coeducation. Raoul was 29 years old and active in the women’s suffrage movement. She saw no reason why a law degree should not be available to a bright woman who had studied at the University of Chicago. And neither did the dean. By the time the chancellor returned, the ink was dry on Raoul’s enrollment form. She graduated in 1920, the year the 19th Amendment gave women the right to vote.

But back to that accent. Raoul was the youngest daughter of the railroad magnate William Greene Raoul, whose work brought him eventually to Atlanta, where he built a magnificent house on Peachtree Street that did not survive the 1980s. Born on Staten Island in 1888, Eléonore descended from French nobility. Raoul de Champmanoir was the original family name.

She grew up among a formidable set of siblings who would go on to careers in manufacturing, farming, charitable enterprises, and political activity. One sister graduated from Vassar and another from the Pratt Institute.

Apparently independent from the start, Eleanore, as she was named at birth, changed the spelling of her name at the age of 24 to Eléonore. At least that’s what I had always thought. But evidence on the web and in publications suggested the possibility that that was wrong. The finding aids for the Rose Library at Emory have it as “Eleonore,” without the accent. But photos available online have captions with different spellings, including “Eleanor” and “Eleanore.”

I had never actually seen her signature. So to the archives I went. The trove of Raoul family papers is large and fascinating. And, happily, I found what I was looking for.

In 1928 Eléonore married a man who had graduated with her in 1920, Harry L. Greene, but she continued to use her maiden name throughout her life in business and professional matters. Here’s an instance of her signature the year after her wedding, on the flyleaf of the financial ledger that covers her checking account for the next two years. 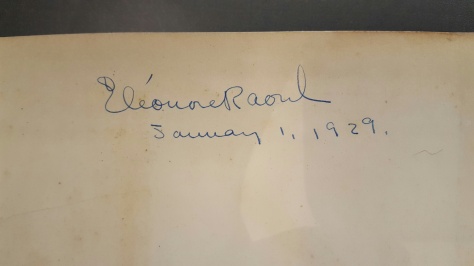 Aha! The accent over the e!

Eleven years later, in 1940, she printed and signed her name with the accent in a document for Trust Company of Georgia.

I go to the library next week to pore over more personal correspondence of this fascinating woman, to whom Emory granted an honorary LL.D. degree in 1979, four years before her death at the age of 94.

J. Marvin Rast 18C 29T earned his place among the 175 “Makers of Emory History” by composing the Emory Alma Mater in the spring of his senior year. The newly formed Glee Club gave the song its premiere at a concert at Covington High School, then road-tested it on tour to shake out any bugs before Commencement. It withstood the test, but a few bugs remained.

For one thing, within a few years the line “loyal sons and true” would leave out a sizeable number of “daughters.” The year before Rast’s creation, Eléonore Raoul had enrolled in the law school, the first female student in the university’s history and the harbinger of what would become a growing distaff proportion of the student body.

In fact by 1945 the line had become embarrassing, as women were graduating from every school of the university. That year the Commencement program for the college and the graduate school included the Alma Mater with the original line. Perhaps because of complaints from graduating female students, two weeks later, on June 16, the line had been changed for the Commencement ceremony for medical school grads and those finishing the Navy’s V-12 program. The line now read, “sons and daughters true”– allegedly by fiat from the university president, who was Goodrich White ’08.

Things became more complicated still. Later in life Rast, who became a Methodist minister after graduation, recounted that in 1960 he was seated at a conference with an Emory alumna who surprised him by questioning the first line of the Alma Mater. In the wake of the civil rights movement, she asked, would he begin the same –“in the heart of dear old Dixie”?

In 1976 (having thought about it a long time!), Rast wrote to the alumni secretary, Walt Davis 34C, to suggest a change in the first two lines. How about something less regional and more high-falutin’?

Rast suggested: Where thy classic halls of learning/ Gleam ’mid oak and pine. He also threw in an additional stanza.

Further correspondence ensued, and by 1981 the suggested changes had made their way to the University Committee on Academic Ceremonies. This august body was chaired by medieval historian George Peddy Cuttino, Oxonian, who, before retiring in 1984, left an indelible stamp on the ceremonies and heraldry of Emory. His committee rejected the proposed changes.

Commencement on June 2, 1977, was the last Commencement graced by the Alma Mater for more than a quarter of a century. In November 1977 James Laney was inaugurated as the university’s president, and, no fan of the Alma Mater, he had it deleted from Commencement programs during his presidency (1977-93).

“I didn’t think it was worthy of a great university,” Laney remarked to an Emory Wheel reporter decades later. “It was cliché.”

The song’s absence from Commencement continued for more than another decade after the end of Laney’s presidency. But in the meantime it would find a revival through the curiosity of a new a cappella group — No Strings Attached.

More about that revival next time.

Thanks to Melissa Cheung o4C o6PH, former senior editor of the “Emory Wheel,” whose article in the February 10, 2004, issue of the paper includes the quotation from Jim Laney and the story of Marvin Rast’s encounter at the Methodist conference.