The year 1923 falls almost equidistant in time between Emory’s founding in 1836 and today, the second day of Founders Week 2018. So it seems fitting to remember two men – not exactly founders, but what I would call “indispensables” – who shared the name Bob, and whose lives were marked importantly by the year 1923.

For the first Bob, it was indeed “the best of times.” That man was Robert Woodruff, who hardly needs an introduction to anyone familiar with the history or campus of Emory. Six Emory buildings bear the Woodruff name, and “the gift” of $105 million from Robert and his brother George in 1979 set Emory on a new path to distinction.

In April 1923, Robert Woodruff, who had dropped out of Emory College after one semester in 1908, left his vice presidency at the White Motor Company in Cleveland, Ohio, to become the president of the Coca-Cola Company in Atlanta. While he took a step up, going from the vice presidency of one company to the presidency of another, he also took a pay cut of about $50,000—about seven hundred grand in today’s money.

Despite that drop in salary, Woodruff clearly made a smart move, because he earned back that lost income millions of times over. He took a risk, invested of himself—and found unimaginable reward. He also found the means to bless many other people in the process, and thus also found great, inexpressible satisfaction.

For another man named Bob, 1923 was the worst of times. It was the year he died.

Unlike Robert Woodruff, he lived in relative obscurity and much more humble surroundings all of his life. He was born a slave, in 1858, and died just four years after Emory College moved from Oxford to Atlanta. His name was Robert Hammond.

For two thirds of Bob Hammond’s 65 years, he was the janitor at Emory College. It’s very likely that while Bob Woodruff was a student at Emory College during that fall semester of 1908, he would have encountered Robert Hammond on campus. When Bob Hammond died, the students and alumni of Emory – “the Emory men,” as the inscription reads – erected a tombstone for him to demonstrate their affection and respect. And as Emory alumna Candace Coffman 09C discovered in research a few years ago, Bob Hammond indirectly returned the favor.

Responding to an appeal by the Emory board of trustees to raise funds for what is now Oxford College, Robert Hammond’s widow, Amanda, to whom he was married for more than forty years, gave a hundred dollars to the effort—the equivalent of more than $1400 today. In 1968 their grandson, John Hammond, joined Angela Jinks and Tony Gibson as the first African American students to enroll in Oxford College of Emory University.

We may never understand fully what motivated Robert Woodruff to give hundreds of millions of dollars to a school he was unable to graduate from. We may never know what seeds of generosity led the widow of a former slave to make a gift to the school where he worked most of his life—a school named for a former slave-owner. But we do know something of the promptings of our own hearts. And we see on the Emory campus the fruits of that legacy left by Woodruff, Hammond, and thousands of others in between. 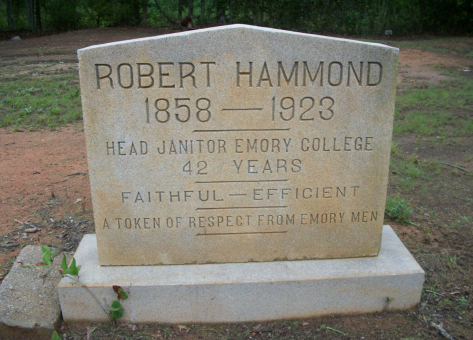 The papers of Robert W. Woodruff are housed in the Stuart A. Rose Manuscript, Archives, and Rare Book Library at Emory.

One thought on “A tale of two Bobs”